Aquaponic is “a system of aquaculture in which the waste produced by farmed fish or other aquatic creatures supplies the nutrients for plants grown hydroponically, which in turn purify the water.” In this project we have two big goals: self sustain/running system and implementing it to rural area. To achieve this goal we started with background research to further our knowledge about the system as a whole and we learned many things. After deep research we gather the team to create prototypes for the aquaponics. After a long process we came up with a final design with specific measurement and material. Then we work on constructing the aquaponic with siphon and filter. Soon we will add fish and crops.

Why black was shot

Why black was fraught

Why black was bitted

For a crime that they did not committed

Life is not fair

Black given opinion was rare

So there no equality

Cause all the laws was for White-free.

During this past weeks, Liger students are preparing for SAT. In math, I worked on improving my test taking skill by using many strategies: timing, skipping, guessing and do good in SAT. I think KhanAcademy really helped me because I can work all day; they still have courses for me to practices more. My goal for SAT is 1200+. 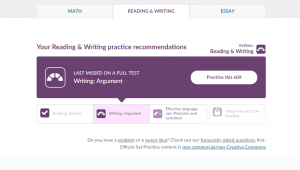 One of the essentials for this year is chemistry and one of the things that we learn about in chemistry is emission. During the period we learn how different reaction between flame and salt give a different color. After the session, we did a mini experiment and this what we found.

In addition to the data, I also get to drawn the map of our classroom.

It was a wonderful experience that give me a chance to see what are different choices for me in the future. I went to college fair to see what are some unique university/college that I can get the opportunity to go in the future. It was very crowned event that students all around PP came to participated. Universities all around USA came to the fair and give more information about their education and what are some unique things about them. All students get many chances to talk to more than 20 universities. One of my favorite universities was Colorado Bolder. One thing that I learn was, university want the students that can give them good reputation. If you are very good, you have a very good chance to find good university.

March 4th, a group more than a dozen students from Liger went to Kampong Speu to do interviewed to quantify the quality of people live before and after Camkids made. In this exploration, we want to learn how to create a survey and analyze data in a formal way. Our first goal to do a survey on is Camkids and its community.  We made many questions to qualify the quality of life in Camkids and some other community and the questions a divided into 6 section: income and expense, loan, Saving group, education, and health&nutrition. Our plan is to do 100 surveys and one survey take about 40 minutes. Due to the time limit of our group (an exploration group of 7 members) recruited around 7 to 8 more students, and we did 100 survey and still, have a lot of time left. Everyone did around 5-7 survey and it took around 5-6 hours in three villages. After finish more than 100 surveys we came back and arrive school around 7:00 PM. The day after we input the answer into the spreadsheet and it took us a week. We finally did it but except we need to analyze the data. So our last step is to analyze and write a good/formal paper.

Tuk tuk is one of the best and most used transportation in Cambodia for tourist according to “Movetocambodia.com.” You don’t need to search for vehicles to go somewhere but the tuk-tuk will come and find you. You can move from block to block, town to town and even from one province to another the tuk-tuk driver is willing to take you there. But why there nearly no women being a tuk-tuk driver? And what are the effects on the economic of excluding women from driving tuk-tuk?

If tourists come and visit in Cambodia they can only see men tuk-tuk driver, men tour guide, men taxi driver and men pilot. One of the reasons women are excluded from those jobs because of environment and society. You can see tuk-tuk everywhere but it is extremely rare to see women driver because if women drive tuk-tuk they will be judged harshly. As a 10 years experienced tuk tuk driver Sophal said that “He never heard of any women tuk tuk driver.” And another tuk tuk driver also mentioned that “women are not brave enough and scare to do their work but some women that he knows and work as a tuk tuk driver are the women who experienced violent and harassed by their husband so they have no choice then work as tuk tuk driver.”  And this clearly show that there are very few women in Cambodia that drive tuk tuk compared to men.

Many types of research show that by including women into driving transportation including tuk tuk and allow women to take a position in the tourism industry will have a big impact on the economic. Washintonpost.com had clearly mentioned that “by allowing the entire country to drive could have a major economic effect.” This encourages particular economic areas to include women to be a driver or tuk tuk driver will help economic of any particular country including Cambodia.

As a developing country and also as a tourist country including both gender are very important. Also if we allow women to drive tuk tuk the tourist have a higher chance of being more sanctified and more cheerful than men because “Women tend to be warmer and friendlier than men.”

“Closing gender gaps in the labor market would raise GDP in the United States by 5 percent, in the United Arab Emirates by 12 percent, and in Egypt by 34 percent.” So how about Cambodia? Encourage women to drive to improve Cambodia.

Ads and what it communicate exploration started in December 2017. In this class we learn how to abstract what information that the ads say and how to add information into ads. We went through many ads and try to understanding what they trying to say and how do the ads display information. We learn about the color, typography and many more things to see what is the affect of each style. We learned how the history of ads changed and how it affect to viewer and customer expression. At the end of exploration we have to display the ads that my team made to everyone that come to our Sharation. And the ads that we display are LGBTQ, what is Sharation and also we portray all the work that we did in the exploration.

In this exploration, I have an opportunity to be a bike tour guide where we tour tourist to see the countryside lifestyle that only located around two kilometers away from Phnom Penh. We divided our exploration into three group, marketing, tour guide and business plan, and in the team, we have different goals to accomplish. Tour guide is my group and our two big goals are to create tour stops and research information about the stop for the bike tour guide to share the knowledge of Cambodia to the others. The second one is to create a tour guide cause for anyone in our school that want to become a tour guide to learn and become a formal tour guide. In the exploration, we found 12 stops and its information. We did some research and interview to get the best information for each stop and the route. The route for the whole tour is 22 kilometers and it takes about 5 hours to finish the tour with the stops, riding a bike, enjoying some food and snack and crossing the ferry. I earn very valuable knowledge from this exploration because I get to learn how to be a confident person, problem-solving and also learn how to run a successful business. The good news is that we have 11 customers in our official launch and as a tour guide I earn around $20 on my first official tour. 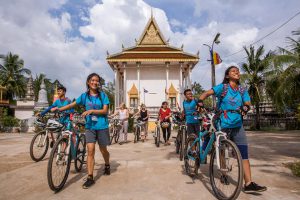 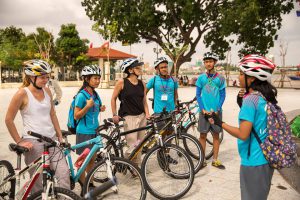 It was wonderful. And it was my first time to play Frisbee on a beach. And it was gracious time because our school had a Christmas break. 13 students from Liger and about 40 others participated in the event. He slept in the tents on a beach and we stayed in Kep for two days. We went on a bus and we arrived in Kep at around 1:00 PM. Our first day we played frisbee from 3:00 until around 9:30 after playing we need to find our own dinner and we ate fried ducks with rice. We stayed until 1:00 AM but we don’t feel tired because we were chatting and playing card. The morning was waiting and the tide of the sea raised about one meter it messed some tents but luckily not our. He found ourself food and at 8:00 AM we start to play. And the event end at around 11:00 AM and it time for us to go back to where we came from. It was really fun playing frisbee with friends and also finding new friends on the beach at the same time I had a lot of challenges like running on sand, the sand too hot, playing a really long time and you need to get yourself fed before you play frisbee. And if I have a chance I would love to be a part of this event again. again.

Liger Leadership Academy students are English Language Learners. They have been immersed in English for over five years but are still developing grammar and fluency. At Liger, we pride ourselves on prioritizing process over product. Please excuse any English errors as part of the learning continuum our students have taken over the years. 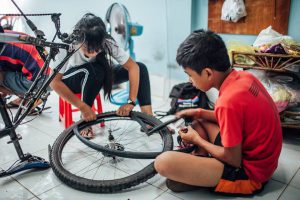 Welcome to my blog! My name is David and I was born in a rural province in Cambodia name Kampong Thom. I tried very hard as a younger student, which led to the surprising and amazing opportunity to come and Learn in a wonderful school in Phnom Penh, Liger Leadership Academy.  I think my education will shape my future in many different ways.

I consider myself funny and friendly. I really love laughing and socializing, and I believe these qualities create strong relationships in my life. I really value the people and the environment around me because they make me happy.

The educational model of Liger is unique and different from other schools because it focuses on relevant, real-world issues. At Liger, we not only grow academically, but also personally. As a senior, I am required to cook my own meals, collaborate and communicate with my roommates, and complete many chores. These skills will help mein my future.

I hope you enjoy exploring my portfolio!